A long time and way around the world to New Zealand 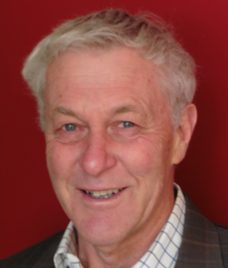 The family sailed from Durban September 1959 on the Roggeveen, a freighter of some 4000 tonnes with berths for 12 passengers. What I remember most about the voyage was that we seemed to be served Nasi Goreng more often than not. I also remember passing through mountainous seas, and all the passengers other than my mother being seasick. For a long time after I associated Nasi Goreng with seasickness.
There are many differences when you emigrate. As a thirteen year old, the biggest effect on me was friendships. I had good friends in Windhoek. In New Zealand I had to start all over. Coming from Africa it soon became clear that things were different. This was brought home to me by my sandals. My classmates all wore roman sandals. My sandals from Africa were fashioned very differently, my new classmates calling them girl’s shoes.
In time, the differences worked themselves out, and I settled into school life. The big opening for me was port.At first, I discovered swimming. In time, I also played rugby and hockey and joined in in athletics and cross country teams. I had some ability as a swimmer and joined the swim school at Onehunga under Cliff Williams. Cliff had experience from Australia and had a number of prominent swimmers in his squad. Training started at 6 in the morning, when we did mainly sprints. In the afternoon, we met again, this time doing longer distance training. In time the training built up to 25 miles per week. I continued competing through my university years, eventually going to Australia with the NZ University team. I was almost left behind at the airport when the team were leaving from Christchurch. I still had a Danish passport, and no one had told me that it was only New Zealanders who could travel to Australia without a passport (mine was at home in Auckland). Somehow the team manager and the immigration people sorted it out and I was on my way.
As a family we spent much time together, and settling into New Zealand involved all of us. What became a part of the adventure was the building of our house in Ellerslie. My father made contact with the Danish Society soon after we arrived. There were a number of other Danish families who had immigrated to New Zealand at the same time. These soon became our new family, and it was they who encouraged my father to build our house.
The house was a two storey structure, a weatherboard built on a block base, set into the hillside, so that the house was entered at the upper level.We dug out the footings by hand and laid out the reinforcing iron, only to have a rainstorm cause the hillside to slip into the footings. So we had to dig out the mud and to do it all again. In time, we built up the base. My job was to cycleover from our rental in Rockfield Road after school, and make up a mix of mortar. My father would arrive to start laying blocks. I would be on my bike to go to Onehunga to do my swimming training. With the help of people like Knud Kristiansen and Arne Olsen we eventually got the structure up and got ourselves a home. The house still stands, and the friendships made continued on. Today, we as the children of those families still meet to share that special relationship that started with our parents.
New Zealand has been good for us, and as I look back, I can only be thankful for the decision my parents made to move to this, the far side of the world.