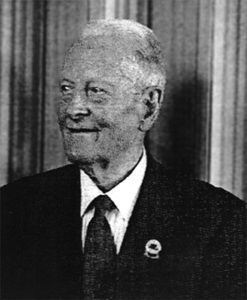 On October 12, Poul Pedersen’s family celebrated the 70th anniversary of his arrival as an immigrant to New Zealand. Poul (92) is one of the few living immigrants of that time, so we asked him what made him choose New Zealand as his future home. Without hesitation it came in ‘clear Danish’: “Well, it came to pass that when I had done my military service in the Navy, I tried to get a job at a dairy factory as I was a trained dairyman. But after much searching, it proved impossible to find work in my profession. My neighbor’s son, who was also a dairyman, had traveled to New Zealand where he had a good job at a dairy company, so I decided to try emigration to New Zealand, a dairy and cheese-producing country.

I, along with two of my friends, managed to get the papers approved for New Zealand as well as tickets for a steamship, “Rimutaka”, which took 6 weeks for the journey. It was a rough trip with severe weather and high seas. A young girl who was a passenger on board became ill and had to be admitted to the ship’s hospital. She became so ill that she died and had to be buried. The captain ordered the ship’s engines stopped for one minute while the corpse was lowered over the ship’s side, an event that made a strong impression on us all on board.

At one of the ports we berthed the ship ‘lost’ two of the stokers. The two men left the ship and did not return when we were to depart, so the captain asked if some of the young men wanted to take a job shovelling coal into the ship’s boiler until we arrived in New Zealand – they would earn nine pounds for it! One of the young passengers signed up but he was only at work one day after which we never saw him again! (Maybe disappeared overboard?)

We arrived in New Zealand on October 12. 1928, where we were greeted by Holger Jensen, whom I knew through correspondence. My two travelling companions said goodbye as they were continuing to Waihi, so Holger and I took the tram to Newmarket where the “Auckland Dairy Factory” was. This is where my neighbour’s son was working, and we met him and agreed to meet again after work.

It was hoping that I could get a job at the same dairy factory but I had to wait until an opening ensued. In the meantime I went to work on a farm where a working day was from five o’clock in the morning until six o’clock in the evening. Payment: One pound per week!

However, I soon got the job at the dairy factory where I was employed for six years in cheese production.

I was offered a position teaching the massage-occupation at the “Swedish Institute” in Auckland, a job I worked for many years until the Swedish Institute closed at which point I started my own business; but that’s another story…”