This is an amazing opportunity, and the passage is paid for.”
He was also hoping to fulfil his dream of becoming a farmer in NZ, this
country of many sheep.

16th March 1957 is a day Oluf Basse will never forget. He left his
parents and his country of Denmark. Because the weather was cold,
grey and snowing it felt easy to say goodbye.

Although he was trained in men’s outfitting, he saw New Zealand, with
its many sheep, as the place where he could fulfil his dream of
becoming a farmer.

The “Captain Cook” left from Glasgow, carrying only assisted
immigrants to New Zealand and Australia. For a 23 year old, it was a
journey of a lifetime. 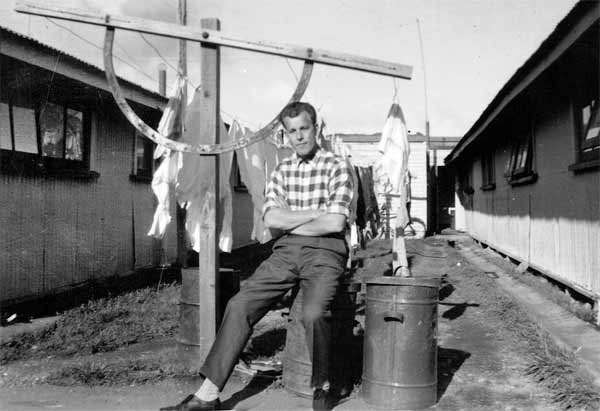 On arrival in Wellington, the immigrants were housed at a camp in
Trentham, Upper Hutt. “The accommodation was simple, but it was
a roof over our head” says Oluf.

The camp’s breakfasts were an experience for Oluf.

As Oluf was trained in men’s clothing outfitting and retail, he
was placed in Vance Vivian’s menswear store in Lambton Quay.
The first day the boss asked his name. He struggled with the
pronunciation of Oluf. “Do you have another name?” Oluf
told him that his full name was Oluf Peter Basse. “That’s
fine,” said the boss, “from now on you will be called
Peter Basse”, and throughout his working life that was the
name.

He liked the work in Vance Vivian’s shop and when not serving
customers, Oluf tidied the shop and storeroom as he had been taught
in his training in Denmark. Mr Vance was most impressed and promptly
increased Oluf’s pay by £2 a week to £13.10
shillings. Oluf was beginning to really like this country. Within
three months, he had saved £60 and with that, he began to pay
back the government the cost of his ship’s passage (£104),
so that he could be released from
his contract.

The central city was where his life was lived during the day and in the
evening. The few dance halls and coffee shops were a great attraction
for this young Dane. Together with seven other young men, Oluf moved
into a large old house in Newtown, near the zoo, where they could
hear the lions roaring at night. The house was rundown and dirty. A
flatmate spilt coffee on the lino and when he wiped it up he found a
completely different colour of the floor. They brightened their flat
up by cleaning floor and walls. 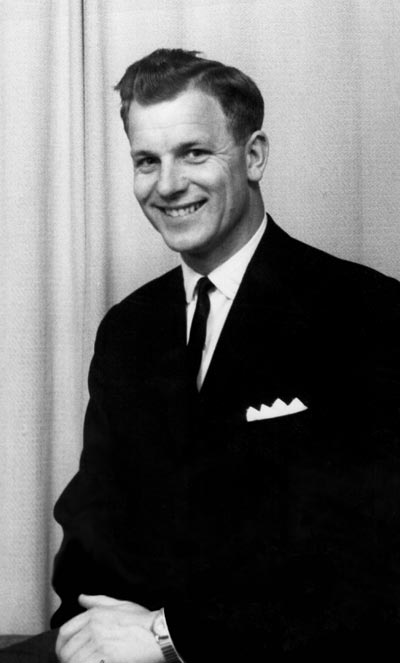 Not every one was happy with foreigners. Listen to Oluf’s
experience below.

The hairdresser’s reaction was unexpected.

They had a lot of fun in those early days, going out as a group with the
girls they knew from the boat. There was one particular young English
woman of all the many on the Captain Cook whom Oluf became friendly
with while at Trentham camp. Pat was a woman who stood out in a crowd,
not just because of her red curly hair, but because she was vivacious,
full of fun and a good dancer. They both enjoyed each other’s
humour, going out, dancing and the relationship began to deepen in
the midst of all the fun.

At that time Oluf heard that, “wharfies” received £25
a week and he decided to investigate further by presenting himself at
the wharf where he immediately got a job. Mr Vance asked why he was
leaving to which Oluf replied in his straight-forward Danish way,
“Because you are not paying enough.” With his increase in
pay and saving as much as he was able Oluf bought a car, which was
very much needed in Wellington. This first car cost him £500
and was a Vauxhall Velox.

A wedding in a new country 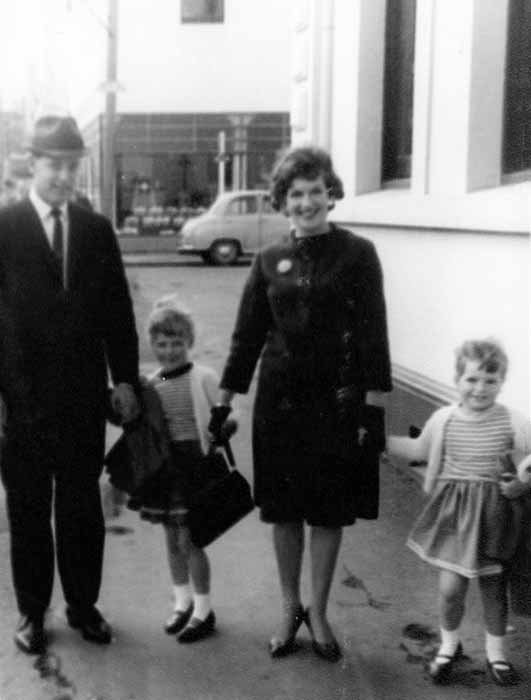 It was while he was working at the wharf that Pat and Oluf decided that
their friendship was trusting enough to get married. The wedding was
held in a Registry Office in Anvil House, the floor above Pat’s
work in the Forestry Service. They had the support of their friends
as neither Pat nor Oluf’s parents were able to be present.
After the ceremony, the wedding party went to the Grand Hotel for a
celebratory meal, but only stayed there long enough to finish their
meal before departing to a bar where the atmosphere was more relaxed.
“On my marriage certificate,” says Oluf, “my
occupation is stated as Wharfie. I can only laugh at that now.”

After some nine months of working on the wharf, he turned up as usual and
was told there was no work that day. The men were sent home and as it
was a “no work no pay job” they went home disappointed.
This happened several days in a row. The effect of Nordmeyer’s
so-called “Black Budget” of June 1958 was being felt.
Oluf’s response was to go back to his old boss and ask for a
job. Vance Vivian was happy to see him again and placed him in the
Cuba St shop where he was in charge of the sports section, and his
pay would be £18 per week. It was not long before his pay
increased to £26 a week!

At the time, Oluf and Pat were living in the small rented house opposite
the Town Hall, but the time had come for a more permanent home. They
purchased a section in Plimmerton, north of Wellington for £710.

Time for a change

After five years in Wellington, Oluf applied for the manager’s job at
Hugh Wrights in Wellington. He was disappointed not to get the job
but was instead offered a job as the manager in Hamilton. So the
Basse family, now increased in size with two little girls Kim and
Lynn, shifted to Hamilton.

The shop in Hamilton was not doing well. It was Oluf’s job to bring
it back to life again. He soon discovered the cause of the problem
when he found 72 dozen beer crates of empty bottles out the back.
“It was a tough assignment,” says Oluf, “but I got
through it. The first year the business broke even and the second
year I was there, there was profit. “I felt satisfied,”
says Oluf.

It was 1964, after 7 years in NZ, when an advertisement for a buyer
for Hallenstein Bros in Dunedin caught Oluf’s eye. He did get the job,
but not before an intensive two hour interview by the whole board. At
that time, Hallensteins had 49 stores throughout New Zealand, which
he saw expand to 56 during his time with the firm. As a buyer, he had
not only to purchase clothing on behalf of the firm but also to visit
the stores. He met famous designers such as Hardy Amies and Pierre
Cardin and even modelled suits for the New Zealand Wool Board. He
loved travelling the country, and getting to know his adopted land.
The family thrived in Dunedin buying their first home and two more
baby girls, Kirsten and Britta completed the family during that
time.” It was a fantastic time in our lives,” smiles
Oluf. 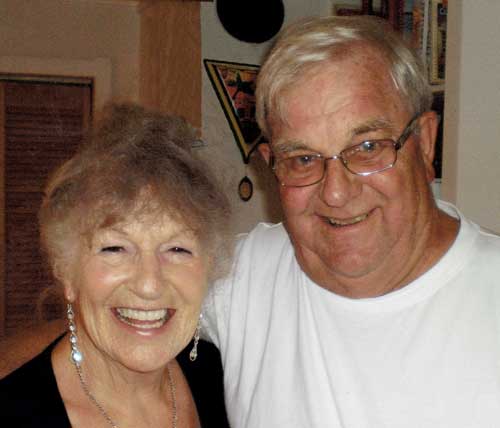 With Pat’s musical influence and Oluf’s sense of humour the
Basse household was a place of fun and activity. Pat was a singer and
enjoyed playing the piano and Oluf developed his love for jazz. Oluf
introduced Danish customs to the family and they had the advantage of
both a Danish and English Christmas. 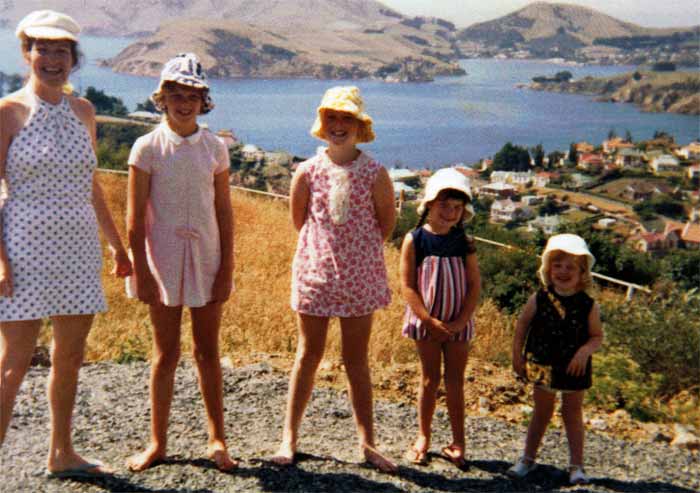 There have been a number of trips back to Denmark to visit his parents, but
a big joy for the whole family was the visit of Oluf’s parents
for a six week holiday. Although they could speak no English, they
were delighted to experience and see for themselves the life their
son had made with his wife and family, in this country, so far away.

Oluf and Pat are proud of their daughters who have all been through
university, gaining bachelor degrees, masters degrees and one PhD, and
who contribute to New Zealand. When the Basse family gather these
days, they are a large family group. There is always lots of talk,
laughter, good food and above all music and sometimes a little
dancing.

His marriage and family have given him great joy and the skills he learnt
through his training in Denmark, stood him in good stead all his
working life. “It has been a rich life,” says Oluf, “not
particularly financially, but in experience and in family life”.

Oluf, has fitted many a man his suit in this country, but the reality is
that Oluf fitted the ideal immigrant requirements and as his life
shows New Zealand really suited him.